These Beagle pages are in tribute to my boyhood pet Daiquiri the Radioactive Beagle.

No really, she really was a radioactive beagle! There was a famous test at UC Davis back in the 1960s that involved irradiating pregnant beagle mommies to see how deformed their puppies would come out. This test is in all the literature. It even surfaced again in the news in the early 1990s, when the site where all these radioactive beagles were buried turned out to still be contaminated.

Anyway, my oldest sister was attending UC Davis at the time, and had a boyfriend who worked in the lab. One particular beagle puppy was marked for destruction because there were no apparent physical deformities, and he smuggled this puppy out of the lab in his briefcase. My sister brought it home. My father was drinking daiquiris at the time, and set one down on the floor. The poor thirsty puppy went to the glass and drank from it, then staggered away. Immediately she was christened “Daiquiri.”

It was fun having a radioactive beagle. She had numbers tattooed inside her floppy ears. She glowed in the dark, so I never needed a nightlight. I'm just kidding about the glow in the dark bit. Still, I wonder… When she grew up, we had about a hundred pet bunny rabbits running wild in our backyard. Daiquiri grew up with more lapin companionship than canine. I swear she thought she was a rabbit too!

There were other things about Daiquiri that indicated the radioactivity may have got to her after all. One time she got out of our backyard. She was returned to us a couple of days later, by a man who said he saw her walking down the middle of one of the main streets in town, following the yellow line with her nose! He says he lured her to his car with part of the hamburger he was eating for lunch. Then he either answered our ad in the paper, or we answered his, I forget which.

Anyway, Daiquiri was my companion from the time I was six years old until I was twenty. The last couple of years of her life were not pleasant for her. I should have put her down sooner, but couldn't bear to do it. She had cancer really bad. I finally realized that she was hurting, and that there was nothing else I could do for her.

I miss my beagle, even though it's going on twenty years now that she went away. I kept her collar with me for a couple of years, because it reminded me of her. Finally, I threw it away or someone else did, I don't know which. All I have now are a few photographs to remind me of what she looked like.

If I ever get another dog, it will probably be a beagle. 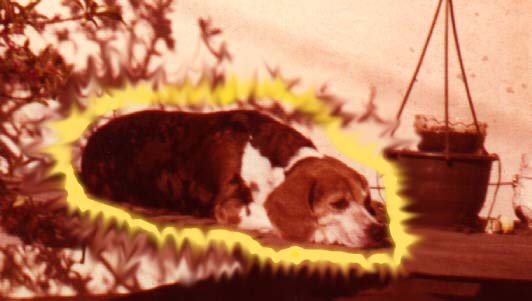