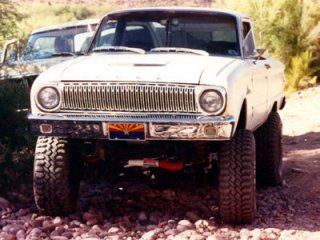 I thought that, perhaps, you would like some history of this on-going project… I live in Phoenix, Arizona, and, on the way home from softball one night, I noticed this old Ranchero parked in the backyard of a house. It was piled high with garbage and other debris. Now, I had already owned a '63 Ranchero that had a built 289, and top-loader 4 speed in it, and had always wanted to convert one to a four wheel drive vehicle. Alas, I had to sell that little gem. ( I found it almost 20 years later in a junkyard…)

So, one night I knocked on the door where it was “stored,” and inquired as to whether it might be for sale? After a little dickering with the old Mexican gentleman that owned it, I was able to tow it home for $200. My wife (ex) was thrilled, as you can imagine. Now all I needed to do was find a suitable 4 × 4 frame to mount the body. I spent a lot of time measuring frames and different 4 wheel drive vehicles before I settled on a '66 Bronco that a friend of mine had. I really wanted to keep it all Ford, so that was a logical choice. I bought the Bronco, in pieces, complete, except for the body. That was another $1000. More thrills for the wife.

The Bronco frame was perfect in width, but way too short, so with the indispensable help of my friend, Howard, we cut the frame in half, and lengthened it 19 ? inches. When we were done with that, we measured it again, and it was closer to being square than before we cut it. Meanwhile, I had been busy removing the entire front suspension, steering, and rear end from the Ranchero. Of course, ALL of my buddies said that I would never get it running, let alone street-legal, and be a daily driver. 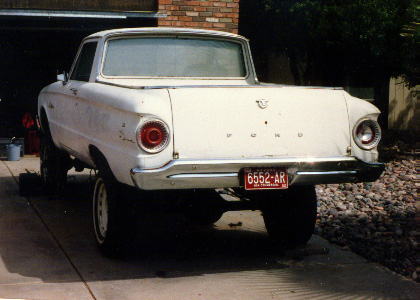 Finally, the big day came. I bought a couple of cases of cold ones, invited my skeptical friends over, and with the help of eight people, we lifted the body onto the frame. Right away, there was an immediate problem. The Bronco had its own spring, and shock towers welded to the frame, and the Ranchero's interfered. No problem! We have cutting torch! I proceeded to cut out the Ranchero shock towers, and replaced them with flat sheet metal. These slid snugly against the shock towers on the frame. 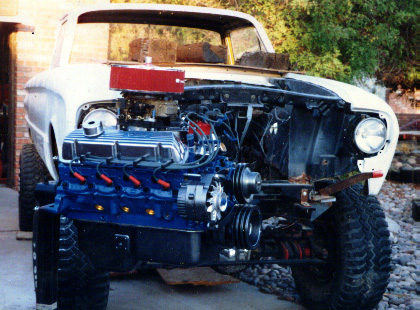 Next, I had to install the engine, as I didn't know if there would be clearance problems when I had to make the body mounts. In it went, with barely enough room at the firewall. Now, the body mounts were fabricated, and installed. The next major issue, was the clutch linkage. As I was using the Montego tilt-column, I had to make a bell crank that would go around the column shaft, and still give me enough leverage to actuate the clutch. Finally, that too, was installed.

The rest of the story is the usual hot-rodding type stuff all motor-heads do… Wiring it, Fixing this and that, etc. When I had gone through the braking system, put the new tires (33 x 12.50) on it, and bolted in some seats, it was time for the self-powered trip out of the driveway.

That first trip around the block made all of the derision from my wife and friends, all worth it. I had DONE it! My hi-flying Ranchero was a reality. All I had to now, was go 4-wheeling, and since the drive-train was almost completely stock, it was great. The truck went wherever I wanted to go.

I drove her every day to work for 5 years, and I never had a breakdown, anywhere. But after 5 years, I decided to paint it, and make it look as good as it drove. I stripped the interior, and painted it. A nice gloss white, with a yellow dash, and door panels. I rebuilt the 302, and put it on the stand. 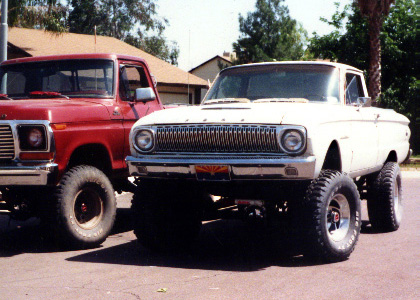 Then the divorce happened. I was able to keep the Ranchero, but at that time, as it was no longer operable, and as I didn't have a place where I could work on it, it just sat. For another six years…. Now, I have just bought a home, so I took my girlfriend over to my friend's house to see it, and gauge HER reaction to it. That afternoon, while driving home, all she could talk about was how “cool” it looked, and “How soon can you get it over to the house to start working on it again?” So I asked her to marry me! Of course she said “Yes!” Soooo….. a new era of Ranchero completion is about to begin. I hope you liked my little tale, it brought back a lot of memories, just writing this.

Thanks again from your “Ranching” Pal,
Dennis r. Green
ranchn62@cox.net