I acquired this bicycle in the early 1980s. It was yellow then. I took it completely apart and repainted the frame and forks red in honor of Manfred von Richthofen, the Red Baron. This bicycle's first red paint job had held up pretty well considering the mileage I had put on the bike over the previous twenty years. I repainted it again in Fall 2001, but I missed the opportunity to repaint the frame when the bike shop took everything apart to replace all the cables and bearings. Instead, I masked off the cables and chrome parts and sprayed Ace Hardware brand 17134 International Red enamel from a rattle can. I added white Schwinn decals from a Varsity on the down tube. I later added white dart decals to the front fork and added a Schwinn rack over the back wheel to carry my book bag when I took the bicycle to Sonoma State University. 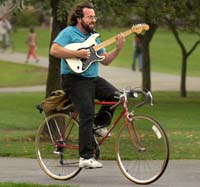 I frequently rode this bicycle around campus between my classes during the Fall 2002 semester. The October 11, 2002 issue of a local newspaper ran a picture of me doing this (thumbnail courtesy of The Santa Rosa Press Democrat).

In the caption to the photograph in that newspaper, you will see my bicycle incorrectly identified as a Schwinn Continental because that is what I told Mark Aronoff, the photographer. My bad, not his. On December 13, 2002 I posted a question in a Schwinn Restoration forum (no longer available) and found out my bicycle is most likely a Schwinn Sportabout, not a Continental after all.

In the winter of 2002-03, I took my bicycle to a professional shop to paint the frame and forks red with the URL (internet address) of my website painted in white on each side of the top tube. Look for more pages to come after I get it back and start riding it again.