A few years ago I started to get arthritis in my right hip that made it increasingly difficult for me to lift my leg up high enough to get on The Minstrel Cycle, the man's model Schwinn ten-speed bicycle I have been riding since the early 1980s. I figured a ladies' model Schwinn of the same vintage but with the step-through frame would be easier for me to use from now on. 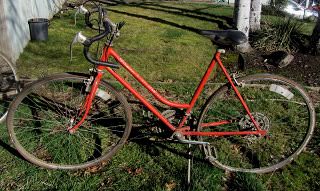 This is a 1977 Schwinn Sportabout Ladies' model as shown on eBay in March 2015. I bought it in March and brought it home from Ashland, Oregon on April 2. According to the guy who sold it, this vintage ten-speed was in a barn in Applegate Valley (Southern Oregon) for many years, then in a garage in Ashland the past five years.

Since this is a Ladies' model of The Minstrel Cycle, I named it “Lady M.” The head badge number indicates this bicycle was assembled May 24, 1977. Everything on it looks like original equipment. 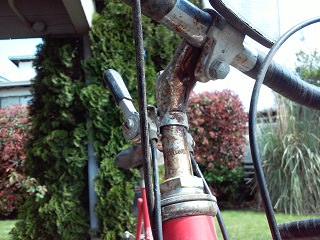 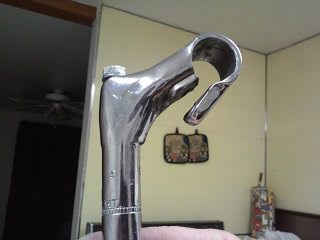 The bicycle was corroded more than I had hoped. I spent a lot of time cleaning it and removing rust as shown in these before and after photographs of the handlebar stem. 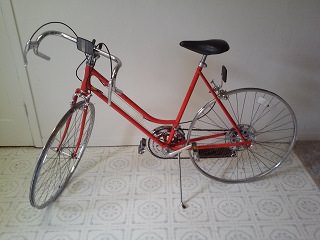 This photograph shows Lady M reassembled on May 21, 2015 after more than a month of cleaning and waxing the parts. All that is missing are tires, tubes, handlebar tape, brake and gear cables, and adjustments. I was a bit too zealous in cleaning and waxing, and I accidentally removed a bit more of the already-worn decals.

Lady M is complete now, but before it becomes my main ride I have to decide whether or not I want to swap some of its original parts with The Minstrel Cycle which has been upgraded over the years with better wheels, handlebar, handlebar stem, brake handles and brakes from more expensive Schwinn models of similar vintage. The Sportabout with its original parts was the cheapest and heaviest ten-speed sold by Schwinn in those years, and the upgraded parts currently installed on The Minstrel Cycle are significant improvements in lighter weight and greater efficiency.