On Sunday, June 1, 2008, I received the following email message from a woman named Lynn:

My brother just rescued a Schwinn ladie's Sportabout from the trash behind our town's city maintenance bldg. - this bikes looks soooo nice and i was wondering if it's worth anything. i have pictures and numbers from it if you would have the time to help me. thank you and have a great day!! soooo pretty out!!

To which I replied:

Hi and thanks for writing. While it may not be "worth" much to some people, what you have rescued is a piece of transportation history that ranks right up there with the Model T Ford and the Piper Cub airplane to its respective form of transportation. What Schwinn did with the electroforged frame bicycles of the 1960s-80s, the Varsity and Continental series of which the Sportabout is a variant, was make bicycle riding popular for adults in the United States.

The Sportabout is a cheaper version of the Varsity but with the same type front fork as a Continental for a smoother ride. The tubular front forks are less vulnerable to being bent than the flatter forks of the Varsities. The best part about the Sportabout are the derailleurs though. They are (or should be if they are the factory-installed ones still) SunTour derailleurs which were the very best designs in the world from 1964-1984 although at the time they were not appreciated as such because at the time Japanese bicycle products were not respected as much as French or Italian made ones.

If you are concerned with the financial worth of your new find, check eBay regularly and search for what comparable Schwinn Continentals and Varsities are going for. You *might* be able to get more for a Sportabout because it is more rare, only being made for two or three years. On the other hand, the Sportabout *was* the very low-end of the product line, cheaper than the cheap Varsity. The irony as I pointed out above is that it had better front forks than the higher-priced Varsity and better derailleurs than the even higher-priced Continental. 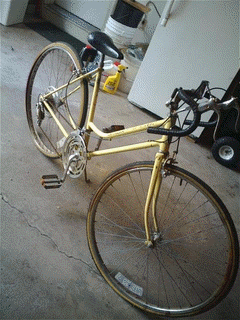 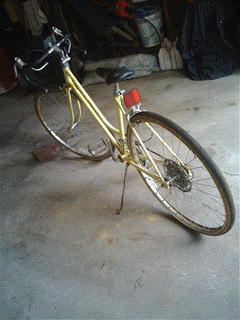 Following this, Lynn sent me two photographs of her Sportabout that were taken immediately after its rescue from the dumpster. I work hard to make my bicycle look nice, and here all she has to do is get one from the trash! I'm jealous! Lynn also sent me a photograph of her cat, Rhymer, in his usual pose.

I was inspired by this to compose the following poem:

inspired by a beautiful lady with a cool bicycle and a fun cat.
Copyright ©June 2, 2008 by Chris Watson a.k.a. “The Bicycling Guitarist”

Lynn's brother found her a new bike.
He rescued it from a trash bin.
and now Lynn finds that she might like
this yellow Sportabout from Schwinn.

The color of canaries with
electro-forged frame of steel.
To rescue from a dumpster, sh*t,
it's hard to beat such a deal!

The Bicycling Guitarist says
this bike is history, and how!
but Rhymer, who is Lynn's cat, says
“Meow.” 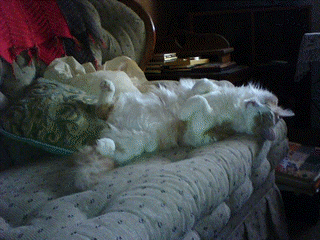 Notice that while I am pontifiCATing, it is the cat that gets the last word.

Isn't it strange that when one is pontifiCATing, one expresses one's opinions in a DOGmatic way?