I scratched a brand-new professional paint job earlier this year while locking up my Schwinn at Sonoma State University, California. This page shows the latest in a long line of attempts to repair this scratch. 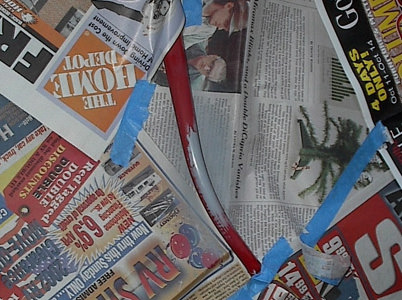 September 17, 2003—This photograph shows the front fork in the process of having a scratch repaired. I had spent a lot of time trying to repair this scratch with brush-on touch-up paint supplied by the shop that had painted my bicycle earlier this year, but finally had some spray paint custom-mixed for me at a local paint store.

The more time spent on surface preparation, the smoother the final paint job will be. The coat of primer shown in this photograph was the second or third, with much wet sanding using 1500 grit sandpaper. 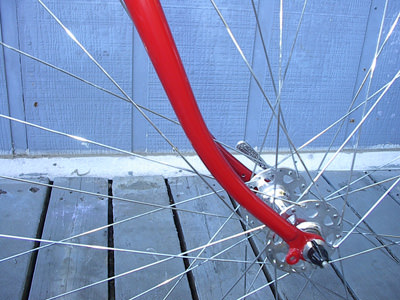 September 21, 2003—This photograph shows the front fork with shiny new paint on it after a little bit of polishing. There is a little bit of gray primer showing through near the bottom of the fork (not visible with all the glare in this photograph), but if I polish enough to get rid of it, more will show up until I will have to repaint the whole thing yet again! I'll eventually get around to fixing this, after the paint has had a good while to cure.

Since this photograph, I repainted the fork two separate times on October 1, 2003. I still wasn't happy and did it one more time on October 4. It is much nicer now.