There are choices on bicycles that come down to convenience or light weight. Many convenient features, or pretty features, or fashionable features, actually add weight! Adding any weight to a bicycle is always a bad thing. You have to decide if the features are worth the weight.

Now, about your fine improvements to your fine Schwinn Sportabout: Congratulations! But I would have gone with the aluminum Continental stem and handlebar as my very first change. It'd save POUNDS of weight! That's my strong suggestion. If you ever do any further changes, think seriously about an aluminum stem and aluminum handlebar as used on a Schwinn Continental. If you want an upright handlebar, buy an aluminum “Northroad” style handlebar, made by Nitto, sold by Harris Cyclery. But, you'd still need a “Schwinn-Approved” stem.

And if you want to go a little modern, you could use the hubs you have, or buy another pair of Schwinn-Approved hubs like those, and have them laced to aluminum rims! You would not believe what happens to a bicycle like yours with light, stiff aluminum rims and top-quality tires. [The Bicycling Guitarist had this done in October 2009. see the New Wheels page for details.]

They add a little chunk of weight; they make life much easier. Always lock BOTH wheels and the frame when you turn your back on it. The high-flange hubs look very cool, and very 1955-1980. [The Bicycling Guitarist upgraded to these in 2003.]

They add a little chunk of weight, but they are theoretically more powerful. An old friend, my oldest best friend, used to point out to me: “If you can lock up the wheel, you already have all the brake you can use.” hmmm… I've always loved the looks of BOTH the center-pull and the side-pull styles. On a very well-maintained bicycle, with both hands on the brake levers, side-pulls probably make more sense (they weigh less). But, cables stretch and sometimes you don't have a complete grip on the lever. And center-pull brakes end up being more powerful in real world usage. [The Bicycling Guitarist upgraded to these in 2003.]

The crank you have on the Sportabout is a cheaper choice, and looks it. This was a very very odd thing for Schwinn to do. This was a very un-Schwinn thing for them to do. But, they had done something like this decades earlier. Still, one of the marks of quality on a Made-in-Chicago Schwinn for decades was always the very lovely crank. The last time they cut corners on a lower-priced crank had been back in the 1940s. And back then, the difference had not been so easy to notice. And back then, the bicycles had NOT ended up with Schwinn badges and decals! They'd been made to sell at tire stores and hardware stores! But, back to your crank. The good news is that it is actually a little tiny bit lighter than a “real” Schwinn crank! But, me personally, I just love the look of a real Schwinn crank. 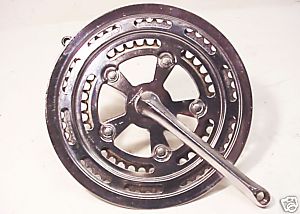 What you need to know – simple – you want a steel crank off of a 1964-1983 Schwinn “10-speed.” Easy! There is a date on the center of the crank. You have to pull the crank to see the date. So, who cares? They were all the same for almost twenty years except some have a better finish than others. Some are very polished under the chrome; some are a bit rougher under the chrome. Look for a very shiny smooth one, or don't worry about it. If it were me, I'd look for an average one. In this case, average is very good! I'd avoid a rough one. The rough finish seems to have happened more in the last years. If you buy on eBay, you'll see things clearly in the photo. You can tell. [The photograph shows a 1973 crank that The Bicycling Guitarist bought on eBay.]

Note – Do NOT worry about a LITTLE rust. Little spots of rust will almost always polish right off! That Schwinn chrome on those Schwinn cranks was almost always very THICK stuff. While you have the thing OUT of the bicycle, before it is installed, have fun polishing it! If it comes to you with the chainrings still on it, have your shop take them off (should take less than 2 minutes!). Have fun polishing it. If you use “SOS Pads” or “Brillo Pads,” be careful. Those are rough. They can scratch. Yes, people will tell you they've used them on chromed car bumpers, whatever. I've seen the scratches. If you go to a good hardware store, you can buy “0000” steel wool (four ought steel wool). Buy any brand of good metal polish. Go crazy.

All done? Good! Now wax it! Yes, really. Use any good car wax. Try to keep the wax out of the threads in the middle. Wait a day or two. Give it a second waxing; keep the wax out of the threads. Now, when it gets greased up and installed on your bicycle, it will shine and be rust-proof for a very, very long time! [The Bicycling Guitarist followed this advice. To see the results, look at the New Crank installed on my Schwinn Sportabout.]

Yes, switch to aluminum! Swapping out your steel stem and steel handlebar will save at least a full pound, perhaps even two full pounds! [In August 2009, Raleigh D. offered me an aluminum stem and handlebar to upgrade my Sportabout. The parts he found are definitely from a 1970s Schwinn bicycle but probably not from a Schwinn Continental. They were installed on my Sportabout October 6, 2009.]

The earliest styles from 1960-1970 are fairly rare, fairly hard to find, and a little expensive. Besides, the 1960-1970 style would not look right for your bicycle. Any of the styles from 1970-1983 would look right on your machine. All of these stems were “Schwinn-Approved.” Most “bicycle factories” did NOT make parts! Most “manufacturers” made a frame and bought all the other parts. Only the truly huge names, Schwinn in the USA, Raleigh in England, Peugeot in France, actually made very many parts. A “Schwinn” part was probably made by Schwinn. A “Schwinn-Approved” part was made FOR Schwinn.

This is the EARLY Made-in-England style. These are uncommon. The horizontal extension is a solid “beam” with a “T” shaped cross-section. Less common. Slightly earlier. Like them or dislike them, it's up to you. This one in the photo needs some time spent on it with some 0000 steel-wool and some good metal polish. 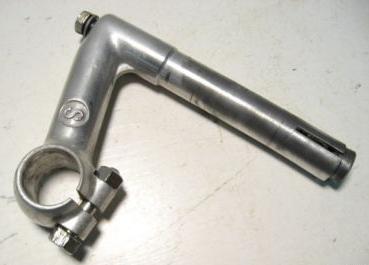 Here is the LATER Made-in-England style, the second of the two Made-in-England styles. The horizontal extension now has a round cross-section. See the head of the main vertical bolt, clearly visible above the top of the stem? You use a good big old wrench to adjust one of these. 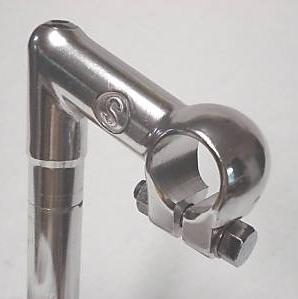 Here is a Made-in-Japan stem. See the recessed head, on that main vertical bolt? You can hardly see it, because it is recessed! You use an Allen-key to adjust this type of stem. Very smooth look here, and probably what a Continental was using the year your Schwinn was made.

Schwinn stuck with an old-old-old USA size. It is smaller than the “modern” sizes. The bad news is, there are no really good stems being made in that old size anymore! The good news is, you wanted to use a genuine Schwinn Continental part anyway! So, you really do NEED a genuine Schwinn Continental-style aluminum stem. Just look for a stem with a big “S” on the side. EASY! And if you look really closely, you can see, right on the stem, where they made it just a tiny bit smaller so that it'd fit the old USA-size Schwinn front fork!

Same story. The oldest ones were made in France (and maybe even Belgium too). The handlebar for a Schwinn Continental from the year your Sportabout was made, 1977, would have been made in Japan. But one of the Made-in-England handlebars could certainly also work. I don't think you'll run across an older, rarer, Made-in-France handlebar. Only one thing to think about here. The Made-in-England handlebars are an older “touring” style, called a “Randonneur-Bend” (yes, the correct name for that style is a French word for touring, used on an English part!). The English handlebar has a wider “flair” at the ends. Also, the tops of the handlebar go up, just a little bit, before they sweep down and out. Like the “flair“? Buy a Made-in-England one. Like the narrower ones? Buy a Made-in-Japan one. They are all very high in quality. Oh! The name of the English company was “GB”. No, it didn't stand for Great Britain. It was a man's initials.

Now we come to the BIG improvement! The single BIGGEST improvement you can make to the ride, the handling, the “feel”, the “liveliness” of your machine:

Always remember, your tires are moving a couple of TIMES faster than any other part of your bicycle! Rim and Tire Weight is the most IMPORTANT weight! You feel the weight of your tires and your rims many TIMES more than any other weight on the whole machine.

Good news. The 27-inch wheel has bounced back (pun intended). For a few years, there were NO high-quality 27-inch rims being made. None. In the past year and a half, two companies have started making really good aluminum 27-inch rims again!

After you have some good aluminum rims, you can switch to “Kevlar-bead” tires. The aluminum rims also grip the tire much, much better! This allows you to switch to modern “foldable” “Kevlar-bead” tires. (Yes, you can fit Kevlar bead tires onto steel rims. There are problems though.) There is ONE brand and model of tire that I strongly recommend: Panaracer Pasela. Everybody loves them. Some folks buy other brands for various reasons, but the other choices have to be really, really fantastic to be as good as Panaracer Paselas. And you have 27-inch wheels. Not too many folks make “World-Class” tires in that size! If I were you, I'd absolutely stay with the 27 x 1 1/4 inch size tires.