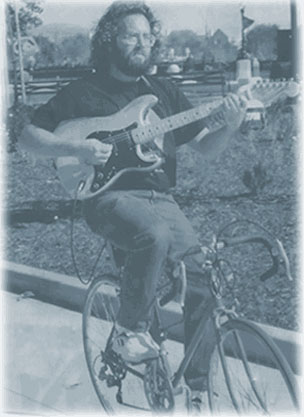 In this newspaper photograph from October 1994, I am riding a Schwinn ten-speed bicycle in a parade in Suisun City, California. I am playing a Fender Stratocaster guitar through a tiny battery-powered amp mounted behind the seat post. How did this come to be?

I grew up in the 1960s (Hmmm, that might be enough of an answer right there) and spent a lot of time riding bicycles as a child. In my teenage years, I rode a Ten-speed bicycle (without a guitar) on thirty or forty-mile day trips. I had a photocopy of a small map of the county, and I used a red pencil to mark the roads on which I'd ridden.

I started playing guitar when I was eighteen years old. I don't remember exactly when or how I figured out I could combine bicycle-riding and guitar-playing, but I was doing both simultaneously by my early twenties. For about ten years (1985-1995) I rode while playing guitar from ten to thirty miles a day every day that weather permitted (about three hundred days a year) in and around the towns of Fairfield, Suisun City, and Vacaville in Solano County, California. It was such a part of my everyday life that I never kept track of mileage or time. I just did it. Looking back, my best estimate is at least ten thousand miles of this activity and probably closer to fifteen or twenty thousand miles if the truth be known.

I wrote many songs “on the road.” I rode all hours of the day and night, 24/7, playing guitar non-stop all the way up and down hills, around turns, in traffic, etc. I commuted to Vacaville and back frequently to visit friends from about 1988 to 1994. For part of these 25-mile round trips I could be seen on a frontage road next to eastbound Interstate 80 outside of Fairfield. During the early 1990s, I went to the Denny's by the Holiday Inn in Fairfield sometimes two or three times a day several days a week for breakfast, lunch, or dinner with my mom and her senior citizen friends there (they drove). If I went shopping, I locked up the bike outside and carried the guitar into the store, and then carried the items home in a backpack or on a rack over the rear wheels.

My mom's house (1960s to mid-1990s), my dad's house (1980s and 1990s), and the two apartments I lived in myself (early to mid-1990s) were all near Dover Park in Fairfield. It is a small park that has a couple of duck ponds with paths around them. I spent many hours late at night or in the wee hours of the morning looping around these ponds in figure eights, changing directions at random by the picnic tables, etc. Some big city parks have miles of paths to ride. In NYC a Central Park bike rental can cover a 6.1 mile loop.

In the spring semester of 1994, I rode my bicycle every weekday to Solano Community College using the bike trail next to westbound Interstate 80. Between classes I rode around the campus. The school newspaper did a two-page article on me.

There is no doubt tens of thousands of people saw me “riding the guitar while playing the bicycle” in and around my hometown over the years. Most were encouraging. Some were mean. One punk mugged me and spent six months in jail. He didn't get my guitar, but it and me still carry scars from that assault.

I really like my Schwinn ten-speed bicycle because of its weight. This gives me stability that a lighter bike would not have. The guitar increases my moment of inertia like the balance pole of a high-wire artist. Since I ride with no hands the front wheel has hardly any weight on it and it glides over obstacles such as rocks and potholes. Some people think I can only do this if I go fast. Actually I can slow to a complete stop without falling over and also turn quite sharply at slow speeds riding with no hands while playing guitar.

My stage name is “The Bicycling Guitarist.” The band I founded (R Band) broke up some years ago. In 2001 I started riding again, but it will take some time to get back into shape. In August 2001, I paid a local bike shop to install all-new bearings, grease, cables, tires, tubes and brake pads on what I thought then was my Schwinn Continental. In December 2002, I found out that my bike is actually a Schwinn Sportabout. In the winter of 2002/2003, I had the bicycle professionally repainted and rebuilt with better wheels and brakes. In August 2003, the bicycle had some more parts replaced with NOS parts (new old stock, brand-new original equipment). I moved to Oregon in the summer of 2006.