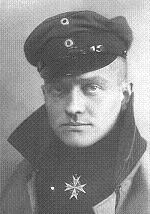 Starts out riding horses, but his thoughts turn to the sky.
Combat on the ground, he's seen his share of blood.
Transfers to the air corps where they teach him how to fly.
Now he's in an airplane soaring high above the mud.

They call him the Red Baron flying in his red Albatros.
He leads the Flying Circus, but he is shot, almost lost.

Richthofen's in combat when he suddenly is shot.
Bullet ploughs his skull and takes away his breath.
Everything goes black as he thinks this awful thought:
“This is how it feels when one is shot down to his death!”

<“shot down to your death” feeling lead solo>

Critically hurt at the start of the fight,
he cannot move and he loses his sight.

Paralyzed and blinded as his plane falls from the sky,
he regains control of arms and legs but still can't see!
Tears his goggles off his face and angrily asks why
if he has to die this is how it has to be?

He regains his sight through force of will,
lands in a field, and he is still…

He should not have fought again,
but felt he owed it to his men.

After being wounded, he is never quite the same.
Leading by example, he returns to his task.
Finding English planes, he shoots them down in flames
until that April morning when he is killed at last!