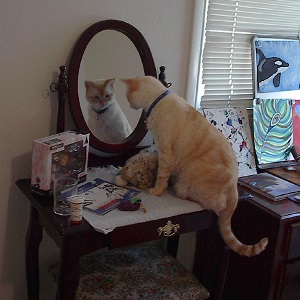 Sunny and the mirror

When I brought this nightstand with mirror into the house, Sunny was caught by his reflection. He spent hours every day just sitting and staring at himself. I do not know if he thinks it is another cat, or if he is just vain, or maybe thinking deep kitty thoughts. Eventually a towel was draped over the mirror so Sunny would do something else. 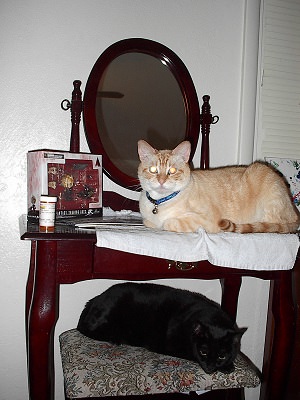 Sunny is on top, not looking in the mirror at the moment. Magick is on the stool underneath. The “little black kitty” Magick is no longer little. She is now the biggest cat in the house by far. Sunny and Magick are the only two kitties in the house who will willingly go underneath a blanket to cuddle, especially Magick. She is also very affectionate, purring loudly and licking your hand as she lays next to you. 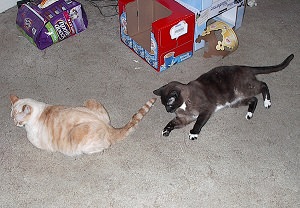 For some time now, Sunny and Seer (the darker cat with black and white paw markings) have been playing a game with each other that they invented together. Sunny waves his tail in Seer's face until Seer swats at it. Sometimes Seer rolls on his side swatting at Sunny's tail. If Seer gets too rough or Sunny has had enough, Seer has to run as Sunny chases him through the house. 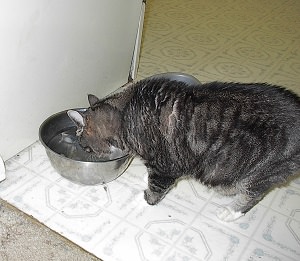 Luna and the ice cubes

Luna is nine years old and the senior kitty of the house, but has found a new love. Now whenever she hears me getting ice cubes for myself, Luna comes running and meowing frantically for me to give her some too. I know she has experienced ice cubes before this summer, but for some reason now it is something she craves.