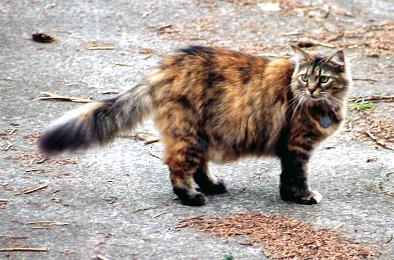 Meggie rode out to Salem, Oregon in a car. Her family lived in Connecticut, and moved out to Salem from there. They stopped in rest stops along the way for Meggie. They moved in across the street from us, into a brand new house. They had two young children. Then they got a dog. Meggie couldn't stand the dog, so she decided to move out. She went to every other house on the block. We were the only house that didn't have a dog, so she moved in with us. My wife didn't want to be accused of catnapping, so she kept taking Meggie back across the street, but Meggie would beat her back home.

Eventually, her family gave up on her and said, “You might as well keep her.” She is easily the most gregarious cat I have ever known. She goes to the mailboxes every day with my wife and stays there to greet everyone who comes to pick up their mail. Meggie knows them all, because she has been in all their houses. When we got another cat a couple of years later, Meggie took him around to all the other houses on the block and introduced him to everyone.

I play the trumpet, and I go to band practice at the high school every Wednesday night from 7 to 9:30 PM. I always stop at a fast food place and buy something for my wife and myself for a late dinner on my way home. Sometimes I get a pizza, sometimes it's a Mexican dinner at “Muchas Gracias,” and sometimes I get hamburgers at Burger King. 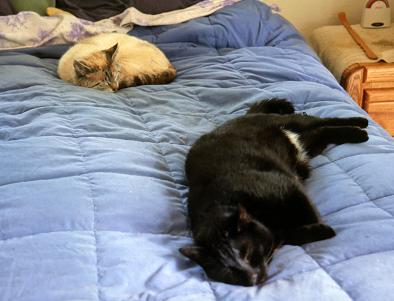 On the Wednesday before Thanksgiving, 2004, I stopped at Burger King just before it closed. When I went in, there was a young black male cat (about a year old) waiting by the front door. I held the door open for him, and he went in, but I could see he was uncomfortable, so I let him back out. I bought my hamburgers for my wife and myself, and when I left, he was still waiting by the door, and he stood on his hind legs with one paw on my knee to steady himself, and pawed at my bag of burgers, and said, “Can I have a bite of your stuff, Dad?” I opened my car door, and threw the bag on the front seat, and said, “Get in.” I could see that he wanted to get in the car, but he was afraid, or too polite, so he didn't. There was nobody else around, and the Burger King closed at 10, so I knew he was alone, and somebody had probably just abandoned him, so I picked him up and threw him in the back seat of my car. When I backed out of the lot, I thought he would probably panic, and I would have to let him out, but he just settled down on the rear deck and said, “I'm going wherever the hamburgers are going, Dad.”

After I got him home, I fed him a bowl of kibbles (we have two other cats) and a small bowl of fresh milk. He hasn't eaten a bite of people food from that day to this (It's been about two and a half years, now) He loves kibbles. He does drink milk from time to time, and he knows how to drink it out of a glass without spilling it. He dips his paw into the glass, and gets it soaked with the milk, and then he licks it clean…He can drink a whole glass of milk that way without spilling a drop. Most cats would knock the glass over and lap up what they could before it soaked into the ground. Not BK. After a year of living on French fries, onion rings, and anything people threw at him out of their burger bags, this cat really knows how to eat. He loves me, and I love him. When I am sitting on the edge of the bed in the morning putting on my socks, he stands on his hind legs behind me and puts his paws on my shoulders and hugs me. I hear him saying, “Thanks, Dad.” every day.

About 6 years ago, I looked out the back window of my house and saw a dirty-white cat hunting along the small stream that runs along the back property line of my yard. There is a steep incline there, and a Christmas tree farm behind that, so we are really on the edge of town, and there is lots of hunting property for stray cats there. A few days later, I saw the same cat on my back deck, but when I went out there, he ran off. I had some chicken in the refrigerator, so I chopped up some, put it in a bowl, and left it with a bowl of water on the rear deck, hoping he would come back. Sure enough, I noticed that it was gone later that day.

A few days later, he came back again, and I put out some more food. As soon as he got used to eating my food, I started putting it closer and closer to the house, and then I got him to actually go in the open bedroom door and eat out of food that I kept inside. I put a cat carrier on the deck outside the bedroom door, and put a blanket and heating pad inside it set on low, and he would sometimes spend the night sleeping there. He would run if he saw either my wife or myself, but after about a year, we woke up one Winter morning to find him sleeping on the foot of our bed. I found out that if I crawled up to him on my hands and knees, he would let me give him the food without running, but he would run if I stood up. He was much less afraid of my wife, and long before he would let me touch him, she could pick him up, and put him on the bed and brush him.

We got a cat door installed in the sliding glass doors of our bedroom, and one day, while he was eating, I pulled the doors shut with a piece of string, and trapped him in the house. It only took him about 20 minutes to figure out how to escape through the cat door, and from then on, we could keep the sliding glass doors closed, and he would come and go at night through the cat door, and we didn't have to keep our bedroom doors open anymore. 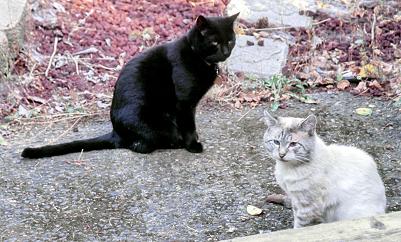 Today, he comes in either the two cat doors leading through the garage in the front, or the bedroom cat door in the back anytime of the day or night he pleases, and he eats regularly at our house. He is still very wild, however, and must be handled with great care, or he will bite. He will only stay in the house with my wife and myself. If anyone else is in the house, he won't come in, or will run away when they come in. He is at least 6 years old, which makes him very old by feral cat standards. Most male feral cats die before they are 5 or 6 years old.

Another year has gone by since I wrote this, and Smokey is still as healthy (and wild) as ever. BK worships him, and sits on our front porch and waits for him to show up every night.