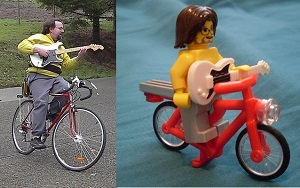 In 2010 I found out Lego has a red bicycle for its minifigures. I came up with the idea of making minifigs of myself. I carefully chose which Lego parts to use for the greatest resemblance. A third-party company makes the guitar but it is Lego-compatible. Since the bicycle model can roll on its wheels, I call these Roll Models. There is also an Evil Twin and even a Borg version! 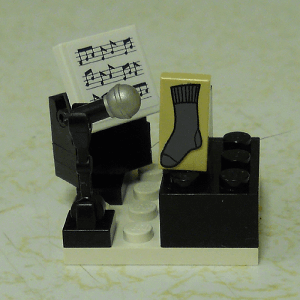 In May of 2014 I published a songbook that uses Lego models I designed to illustrate many of the lyrics to the three Above All That is Random songs I cover. The model in this photograph depicts “My sock sings me songs” from Lava Lamp (Bubbly) - Above All That is Random 5 by Christina Grimmie and Sarah Happlesful. Two versions of this songbook are available for free download in the ubiquitous Adobe Acrobat PDF file format: 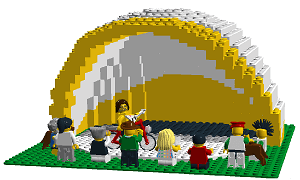 In November of 2014 I completed an original six-hundred part Lego model of The Bicycling Guitarist at the Half Shell stage (Nichols Band Shell) in Stewart Park, Roseburg, Oregon in 2014.