Sometime around 2010 I got the idea of making a Lego model of The Bicycling Guitarist. There are different Lego minifigures with different faces, hair, etc. and I figured I could find some parts to resemble me. There are also Lego bicycles including some in red which is the color of my Schwinn “The Minstrel Cycle.” At that time Lego did not make guitars for its minifigures, but I found another company that made some that look like a Fender Stratocaster just like my Silver Anniversary Model Strat “Annie.”

Uncanny resemblance, don't you think? Clothing colors may vary on minifigures of The Bicycling Guitarist but in every case the colors represent clothes I actually wear. I also chose the type of Lego hair to be similar to my color and usual style.

The red Lego riding cycle has had a few parts added to make it more closely resemble The Minstrel Cycle (the Schwinn ten-speed bicycle I have been riding the past thirty years).

The only non-Lego part in this model is the guitar. Lego does not make a double-cutaway shape electric guitar, so I had to use a third-company Lego-compatible option (Brickforge) to represent Annie the Anniversary model Fender Stratocaster. All other parts are genuine Lego. 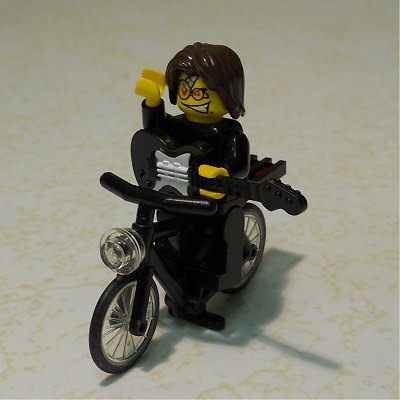 I once accidentally got some black guitars with white pickguards instead of white guitars with black pickguards. For a while those black guitars just sat around and I wondered what I would do with them. Then based on my studies of the multiverse (possible alternate universes with different versions of ourselves) I thought there might be an “Evil Twin” of The Bicycling Guitarist out there somewhere.

It turns out these Evil Twin models are insanely popular with my fans, but the third-party company that makes the guitars stopped making them in black. The past year or two Lego started making guitars for its minifigures, but they are Flying V shape guitars, not Stratocasters. So to represent Annie in my regular “Roll Models” of The Bicycling Guitarist I continue to use the white guitars with black pickguards made by Brickforge, but to represent Versie in The Evil Twin models I now use a black Flying V guitar made by Lego. The original Evil Twin version shown in this photograph is no longer available. 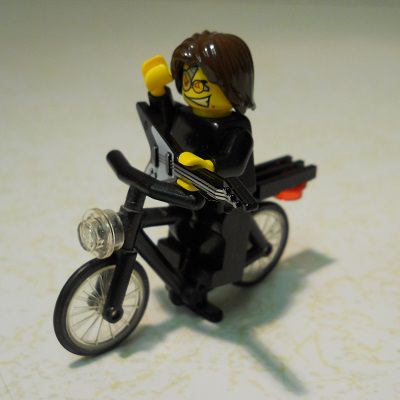 This is an alternate Evil Twin from yet another universe in the multiverse, different than the one where The Evil Twin plays a Strat like me. In this alternate universe, The Evil Twin plays a black Flying V guitar named Versie. The guitar is shaped like the letter “V” for Versie, so that's a plus, and it looks more evil than the double-cutaway Strat shape of Annie and the earlier Versie.

Another plus is that in these new Evil Twin models all the parts used are genuine Lego. Let me make clear that Lego does not officially endorse any of my “Roll Models.” These are my own designs, what is known by Lego fans as a MOC (my own creation). I use these as promotional tools to spread awareness of The Bicycling Guitarist.

When I sell these, I do not charge very much more than what it costs me to make them. I have to charge more for The Evil Twin models because the black Lego bicycles cost a lot more than the red Lego bicycles. I do not know why. I place the model in a nice gift box with an attractive label and include an instruction sheet.

When you buy one of these models from me, I provide an instruction sheet with full color photographs to illustrate the preferred method of assembly. Here they are available for free download in the ubiquitous Adobe Acrobat PDF file format.