In 1960, the Ranchero was based on the new Ford Falcon. The Falcon cars were introduced by Robert McNamara, who soon left Ford to join President Kennedy's cabinet as Secretary of Defense. Falcons were designed to compete with the Volkswagen Beetle and other small economical imports. The 1960 Ford Falcon was much like a modern version of the extremely popular Ford Model A of the late 1920s. The earliest model Falcon had an 85 horsepower engine. The advertising claimed thirty miles per gallon.

Even though the Falcon Ranchero had only a six-foot bed and could carry only eight hundred pounds, the public loved them. Because Ford downsized the Ranchero in 1960, they were cheaper and outsold the 1960 Chevrolet El Camino. This may be why Chevrolet discontinued their version until 1964.

When Robert McNamara left Ford to join President Kennedy's cabinet, Lee Iacocca came in. He thought Ford wasn't making enough money on low-optioned Falcons, so Lee helped introduce more highly optioned Falcons from 1962-1965. Lee Iacocca also didn't like the Falcon's styling, so he rushed out the Ford Mustang. This was initially based on the Falcon platform. With the success of the Mustang, the Falcon line withered away until it was discontinued in 1970. 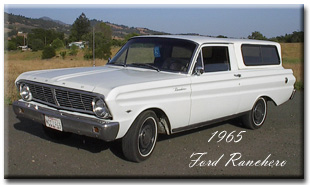 What a pretty little truck!
What's not to like about its styling?

I have a 1965 Ford Falcon Ranchero. I belong to an Internet newsgroup about Falcons and a local chapter of the Falcon Club of America. Much of my information came from Al Aiello's articles about Falcon history and Geoff Belleau's posting of old magazine articles.

To see more of my 1965 Ford Falcon Ranchero, check out: Gallery of images.

The front half of the 1966 Ranchero still looked like a Falcon. It was marketed as a low-priced luxury pickup.