The 1967 Ranchero was based on the Ford Fairlane platform. It was marketed with Thunderbird power. 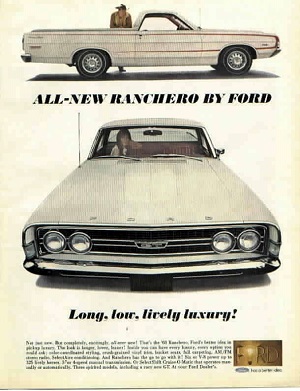 I love this ad from 1968. Now the Ranchero is a luxury pickup, but not just ordinary luxury. Oh, no, we're talking “Long, low, lively luxury!” The Ranchero is “Not just new. But completely, excitingly, all-over new!” (italics in original). This is advertising lingo at its finest.

The Ranchero is marketed as a second car from 1969-1972. The idea is if you get a second car, it should be able to do things your first car can't do. The ad on the left above is from 1969. It makes a suggestion. The two ads on the right are both from 1970. Notice how the second ad phrases the idea as a question while the third ad gives an order.

The 1971 ad on the left cleverly tells people that they are getting a second car anyway, so the Ranchero is their best choice. In the 1972 ad on the right, Ford apparently loses patience and makes it an order again: You WILL get a second car; we have ways of making you buy.

In 1972 and again in 1973, the Ranchero was advertised as “the pickup car.” 1973 was the best-selling year for both the Ford Ranchero and the Chevrolet El Camino.

In 1977 and 1978 the Ranchero was targeted to “the man in charge.” which actually means the man who likes to think of himself as being in charge. Who doesn't?

In 1979, the Ranchero's last year of production, an ad says “Comfort and Capacity.” That is what the Ranchero was all about from the very beginning, the comfort of a car with the capacity of a truck. We have come full-circle.