August 2, 2009: Raleigh D. from Kansas (who earlier this year contributed two pages of information about vintage Schwinns to my website) offered me an aluminum handlebar and stem that would be a good upgrade for my 1977 Schwinn Sportabout . At first glance these parts look like what you might see on a 1974 Schwinn Continental. A closer inspection reveals that these parts are probably not from a Continental. They may have come from a 1973-1976 Schwinn World Traveler or Schwinn Le Tour, two of the bicycle models Made-in-Japan for Schwinn in those days. I thank Raleigh D. for sharing the blessings of his Schwinn knowledge with me and others interested in such knowledge. 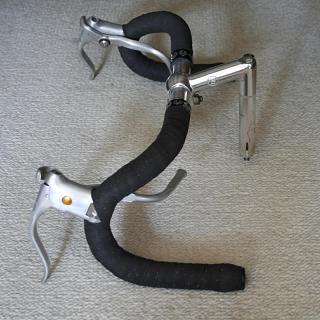 The handlebar was freshly retaped with nice, fairly expensive genuine Cinelli “cork” handlebar tape. The handlebar and stem are both nicely polished, very pretty! The brake levers aren't as pretty or shiny, but the good news is they were made for Schwinn by the same company (Dia Compe) that made the nicer ones I currently have on my bicycle, and the mounting clips are identical. Any bicycle shop can swap the levers with no disturbance to the new fancy “cork” handlebar tape. 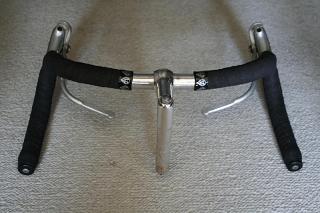 This stem looks like a later generation Made-in-England stem used on mid-1970s Schwinn Continentals. However, the bottom of the stem is made differently and is stamped MADE IN JAPAN. This stem uses a cone instead of a wedge for tightening. This is an older way and used to be thought of as a higher-quality way of doing things. Also, it weighs a little less.