I put quotation marks around “new” because this 1973 crankset is actually a few years older than the rest of my bicycle. 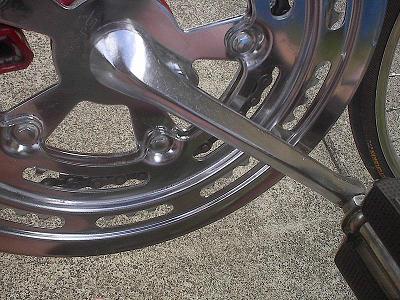 This is a Schwinn one-piece “diamond” crankset as used on the 1970s Varsity , Continental , and Suburban ten-speed bicycles (maybe other models too). It looks better and is stronger than the cheaper foreign-made crank that came stock on my Sportabout . This crankset has a 39 tooth chrome chainwheel with 52 tooth chainring and guard, 170 mm crankarm, pedal thread 1/2 x 20 TPI. Marked SA 14 73. 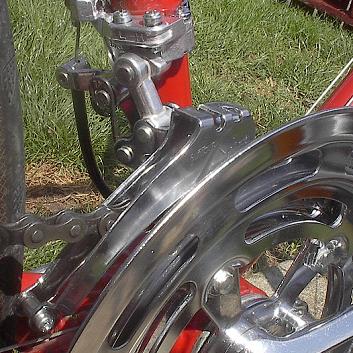 I also replaced the front derailleur with a NOS SunTour Spirt that was made for Schwinn's seat tube size. The SunTour Spirt I had put on last year had the wrong size clamp and needed a shim to fit the seat tube. I quote Sunset for SunTour by Frank J. Verto:

SunTour made their first front derailleur, the Spirt, in 1966. Most of SunTour's front derailleurs worked "backwards" to other makers. Pulling the cable shifted from the large to the small chainwheel. The return spring shifted from the small to the large chainwheel. This was a better design because both levers gave you a lower gear when you pulled back. In addition, the down shifts are more severe as you drop to the smaller chainwheel under load. 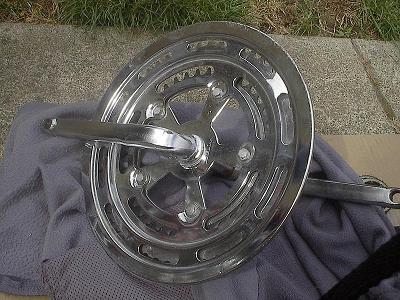 This photograph shows the original Sportabout crank removed from my bicycle. See how plain it looks compared to the “diamond” crank above. I quote Raleigh D. from an email he sent me August 1, 2009:

The cheaper crank was made out of a steel rod that had been bent into that shape by big machines. That was a strong way to do it, but not the best. Taking a straight piece of rod and bending it is okay, but there is a better way. Your replacement crank, a genuine Schwinn crank, is made of forged steel that was forged into that exact shape. That steel was forged into that one shape. It has never been a straight length of rod. It's not trying to return to any other shape! Forged steel is the strongest!