eBay has been the source of most of the replacement parts for my bicycle. 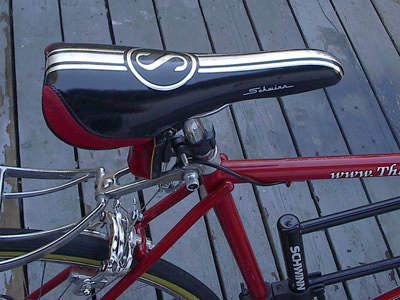 September 21, 2003—This shows a slightly-used seat bought from an eBay auction. It was made for newer seat posts than mine, and the rails had to be squished together by torquing them down to make it fit.

On October 15, 2003 the seat post clamp (present but not visible in this photograph) was replaced with a used one in good condition whose ridges were not as worn so it would grip tighter without slipping.

October 23, 2003—This photograph shows the NOS SunTour V‑GT Luxe rear derailleur. This is apparently the first time it has been installed on a bicycle, as new as one can get for a 1970s piece of equipment. The chain is a brand-new KMC Z30 Chain.