In some vintage bicycle discussion forums online, one sometimes encounters the term “Varsinental” to describe the Varsity and Continental ten-speed bicycles made by Schwinn in the 1960s and 1970s. John E. may have coined the term, and he gave me permission to use it freely. As related on my Sportabout page, I recently discovered my bicycle is a mid-70's cheaper version of the Varsity that has a tubular front fork similar to that of a Continental.

My Sportabout now has quick release wheels dating from 1974 and NOS Schwinn Approved center-pull brakes, all Continental-type stuff. I'm keeping the chrome handlebars, cheaper crank, and Japanese derailleurs, so it still shows much of its Sportabout lineage. But with these new Continental components I think I have created the first “Sportinental,” at least the first to be called by that name.

[In April 2009, I receive a series of emails from Raleigh D. offering Suggestions to upgrade my Schwinn Sportabout. Following his advice, in August 2009 I upgrade to a regular Schwinn ten-speed crank. According to Raleigh D., the first thing he would have done is replace the steel handlebar and stem with an aluminum handlebar and stem from a Continental or other Schwinn of similar vintage, but the most important change he recommends is to switch to modern aluminum rims. I have these changes done by the LBS (local bike shop) in early October 2009. I keep the Japanese derailleurs of course, because they are still the best for this type of bicycle.] 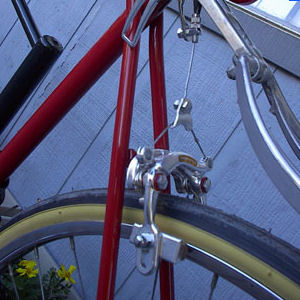 March 4, 2003—Here are the rear center-pull brakes, Schwinn Approved of course! These and the front brakes were purchased NOS (New Old Stock, still in the box) from eBay. I had these installed because they are brand-new, never been used. I also got used brake sets from Bike Heaven (where I got my quick-release wheels) and from “Dopey” of the Schwinn Restoration forum online (the one who correctly identified my bicycle as a Sportabout). 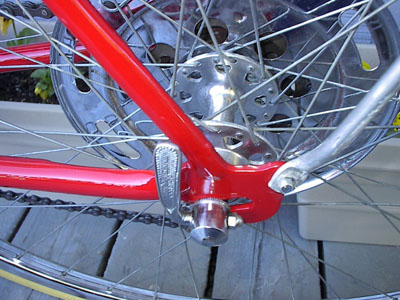 March 4, 2003—Here is a close-up of the quick release lever on the rear wheel. Both the front and rear wheels have “74” marked on the hub and have Schwinn S-6 steel rims. I bought them used from Bike Heaven (Craig Morrow). The rear axle had new bearings put in by the owner of the local bicycle store. 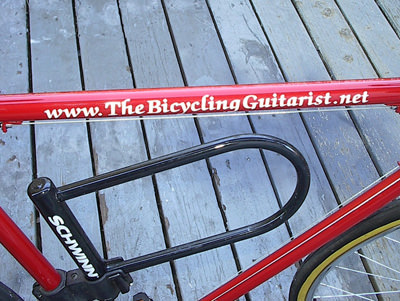 September 21, 2003—This is what I had painted in white letters on both sides of the top frame tube, the URL (internet address) for my website. My domain name describes what I do. The bicycle's color is Rangoon Red, a Ford color from 1965 available on Falcon Rancheros similar to mine and also used on Mustangs.

This photograph was taken more than six months after I received the bicycle back from the paint shop. The shininess comes from many hand-rubbed applications of Racing Glaze Polish and Sealant.

In August 2003, I obtained some more NOS parts (new old stock, brand-new original equipment) to replace the brake handles, shift levers, and spoke protector. On August 20, I took pictures of the parts as installed on the bicycle.

In September 2003, I spent a lot of time polishing my bicycle. On September 17, 2003, I repaired a scratch on the paint of my bicycle's right front fork. On September 21, I took photographs from different angles (including the one immediately above this) trying to capture the shininess for posterity before it fades. In September and October 2003, I also took photographs of more new parts installed on my bicycle including a new seat (much snazzier than the one shown on this page), and a NOS rear derailleur.