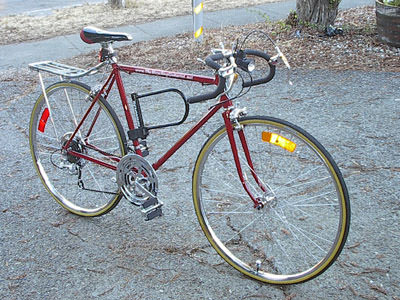 My bicycle does not look as shiny in this photograph as I thought it would when I took the picture. Similar photographs of the bicycle taken in direct sunlight had too much glare for me to use them.

Compare this photograph to a similar view from a couple of years ago. 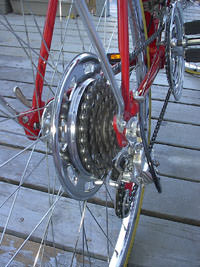 This photograph shows the freewheel and chain as installed on the bicycle. Note the shininess of all the metal pieces in the picture, including the wheel rim and spokes.

The NOS (new old stock) spoke protector was installed a month before this photograph was taken. The quick-release wheels and NOS reflector pedals were installed six months before, after the bicycle came back from the paint shop.

The rack over the rear wheel was loose. I used a 9/32 inch automotive ignition wrench, a tiny little thing, to turn the outside where it attaches to each chain stay while I held the inside nut with needle-nose vise grip pliers. 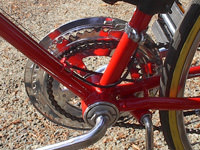 The front sprocket is so shiny it is like a mirror. 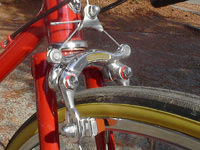 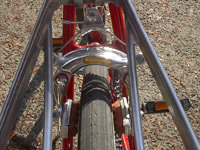