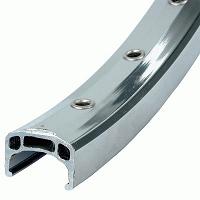 As Raleigh D. says in his Suggestions to upgrade my Schwinn Sportabout, the single biggest improvement I could make for the ride of my machine would be to switch to modern aluminum rims. Here is a cutaway view of a Sun CR-18 630 mm/27 inch bicycle rim as shown on the Harris Cyclery website. These rims are each polished aluminum with 36 holes drilled, Outer width 22 mm, Inner width 18 mm, Weight 560 g. 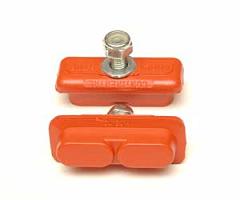 New rims deserve new brake pads too! Here are Kool-Stop Continental “Salmon” brake pads as shown on the Harris Cyclery website. These are made with a special material that includes iron oxide (rust) and are supposed to be the best brake pads available for bicycles. 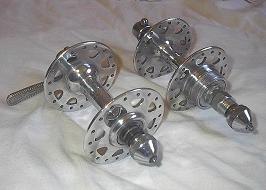 Here is a pair of Schwinn Approved quick release hubs such as might be found on a mid-1970s Schwinn Continental. I bought these from Craig Morrow (schwinnstore on eBay) in Summer 2009. The local bike shop repacked them with new bearings and Phil Wood Waterproof Grease. 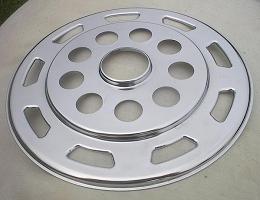 This is a Schwinn spoke protector also from Craig Morrow (schwinnstore). Other names for this piece include “pie plate” and “dork disk.” Many cyclists consider it unnecessary and remove it, but I like the shininess it adds. Bling-bling! 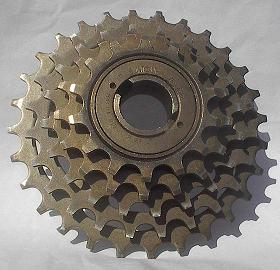 This is a SunTour Perfect 5 speed 14-28 teeth freewheel I bought from paddythepeddler on eBay. I quote the late bicycle guru Sheldon Brown of Harris Cyclery from his page about Sun Tour Bicycle Parts:

Sun Tour freewheels provided much better shifting than older designs due to the superior design of the sprocket teeth. The tops of the teeth were not squared flat nor grooved, as with older designs, but were asymmetrical, with a slant inward. This provided a sharper outside corner of each tooth for better chain pickup, and the slant helped the chain slide down sideways into good engagement if it was tending to run along the tops of the teeth. 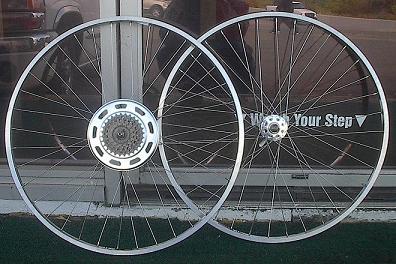 This photograph of the newly-built wheels was taken the morning of October 6, 2009, when I dropped my bicycle off at the LBS (local bicycle shop) to have them (and the “new” aluminum handlebar) installed on my 1977 Schwinn Sportabout. These wheels with aluminum rims are significantly lighter AND stronger than the ones with steel rims they are replacing. 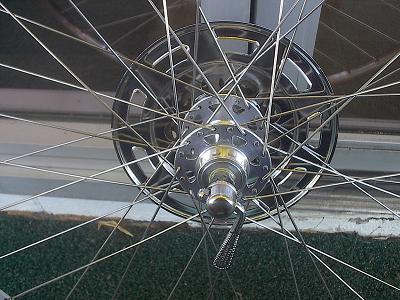 Here is a close-up view of the left side of the newly built rear wheel, showing the back side of the spoke protector and the quick release lever of the vintage Schwinn Approved large flange hub. This photograph was also taken the morning of October 6, 2009.