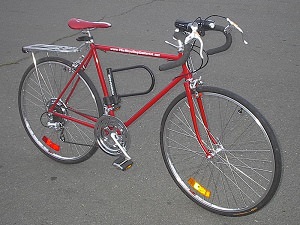 As related on my Sportinental page, in 2003 I upgraded my 1977 Schwinn Sportabout to quick release wheels and center-pull brakes from a higher-priced Schwinn Continental of similar vintage to create the first Schwinn “Sportinental.” This was a pun on the term “ Varsinental” one sometimes encounters in vintage bicycle forums referring to the once ubiquitous Varsity and Continental low-end models of Schwinn ten-speed bicycles with flash-welded (electro-forged) frames.

In 2009 my “Sportinental” got several more upgrades, including a vintage aluminum handlebar and stem and modern aluminum rims for the wheels. Raleigh D. suggested these specific upgrades back in April 2009. He sent me another email in early October 2009 in which he not only identified the brake levers currently installed on my bike as possibly being intended for a higher-priced Schwinn Super Sport, but also pointed out that my bicycle's new wheels also resemble what might be found on a Super Sport. So now I believe I have created the first “Super Sportabout” ten-speed bicycle. Should I instead have called it a “Super Sportinental?” I think not, for reasons I explain below. 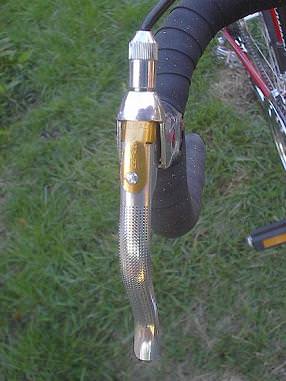 Here installed on the “new” aluminum handlebar is one of the brake levers I bought from eBay in their original packaging (Schwinn part number 9776) and had installed on the original steel handlebar back in 2003. In his email from October 2, 2009, Raleigh D. says:

About your levers — Those were made by Dia-Compe for the “fillet-brazed” “handmade-frame” line of bicycles sold by Schwinn under various names. … The most likely possibility is those brake levers were intended for a Super Sport. Those levers have both the quick release mechanisms (the golden yellow parts) as well as the very large cable-adjusters allowing you to take the slack out of your brake cables very easily! Very nice! 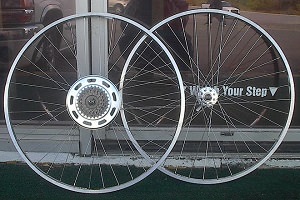 Here are the new wheels built using vintage Schwinn Approved quick release hubs laced to modern Sun CR-18 aluminum rims. In addition to informing me about which model of Schwinn probably had the style of brake levers shown above, Raleigh D. also pointed out the following interesting fact:

You are not going to have 1972 rims. Your rims are going to be much, much better made! New rims and new spokes make so much sense. The manufacturing has really gotten much, much better on those two components. However, your rims are going to LOOK very much like the rims from a 1972 Schwinn Super Sport! By the way, the Schwinn Continental and the Schwinn Super Sport used EXACTLY the same hubs! So, you are basically, pretty much, going to have a new pair of Super Sport wheels (only even better)!

Since my Schwinn “Sportinental” now has brake levers AND aluminum rims like a Schwinn Super Sport, I toyed with the idea of calling it a “Super Sportinental.” However, I decided not to, because then it would sound more like a cross between a Super Sport and a Continental than anything to do with a Schwinn Sportabout. The Super Sport's fillet-brazed frame was made differently than the cheaper electro-forged frame of the Continental, Varsity and Sportabout models.

In spite of all the upgrades, my bicycle still has the most important defining characteristics of the comparatively rare and little-known Schwinn Sportabout: the electro-forged frame, painted tubular fork and SunTour derailleurs. So to all intents and purposes, this is still a Schwinn Sportabout, albeit nicer now than when it was brand-new from the factory. I believe the term “Super Sportabout” is more appropriate to describe the upgrades to this bicycle while still paying tribute to its Sportabout beginning.

In an email I received September 21, 2009, Annette Thompson of The Bicycle Museum of America agreed to take the “Minstrel Cycle” of The Bicycling Guitarist for their museum after I die. She said it would make an interesting display. I told her that if things change dramatically in my life, my bicycle may end up going to the Smithsonian or the Rock and Roll Hall of Fame instead. Of course, if things do change that dramatically I will be sure to reward The Bicycle Museum of America some other way for offering to give my bicycle a good home after I die. Of course that assumes I don't die ON the bicycle. That might result in an even MORE interesting display!