The originals of these photographs are black and white, but the Scottish-based company Century Imaging has done a fantastic job restoring them and adding color. Murray Robertson graciously granted permission for me to post these examples of his work on my website. I am eternally grateful to him, not only for this favor, but for allowing me to view a personal hero of mine and my favorite type of aircraft with the added dimensions of color compared to the original photographs. I invite everyone to visit his website, Century Imaging, if you have any old or damaged photographs you wish to have restored or colorized.

The black and white versions of these photographs are well known to me. I have seen them many places. For example, Dale Titler in the hardcover edition of The Day the Red Baron Died (Walker and Company, New York 1970) identifies this as one of von Richthofen's triplanes, but says it is not the aircraft in which he was killed. The Red Baron flew several different Fokker triplanes (not all of them red) towards the end of his career, although most of his victories were scored in Albatros biplanes.

Dan-San Abbott of the Aerodrome Forum has good reasons to identify this aircraft as Fokker Dr.I 477/17 and says this photograph was taken at Léchelle on March 26, 1918. He also specifically says it is not Dr.I 425/17, the machine in which the Red Baron was killed.

Alex Imrie in his book The Fokker Triplane (London 1992) says that this is Fokker Dr.I 425/17. He points out an inverted v blemish on the fabric underneath the cockpit where the fuselage dope came off (the blemish isn't visible in this colorized version of the photograph). Later in his book (photograph #116) is another view of this aircraft painted with Balkan (straight) crosses instead of the earlier Cross Patée of this photograph. Alex Imrie identifies the aircraft of photograph #116 as Fokker 425/17 in its final state of decoration. 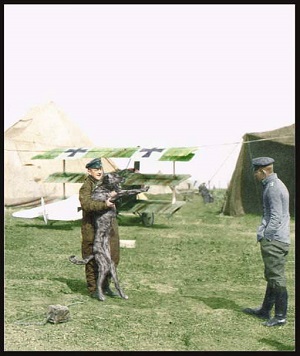 “The most beautiful being in all creation is the genuine Danish hound, my little lap-dog, my Moritz.” M.v.R. 1917

This photograph of Manfred von Richthofen playing with his dog Moritz and chatting with Leutnant Erich Löwenhardt of Jasta 10 is identified by at least one source as being taken at Awoingt airfield in March 1918.

Some people claim this photograph was taken the morning the Red Baron died, April 21, 1918. The photo was taken by Richard Wenzl, another Jasta 11 pilot. On his last morning von Richthofen tipped over a stretcher on which Wenzl was resting, in retaliation for which a wheel chock (such as seen towards the bottom left corner of the photograph) was tied to the tail of Moritz, von Richthofen's dog.

Notice the older style insignia on the triplane in the background. According to Alex Imrie in his 1992 book The Fokker Triplane, the off-white tail of this triplane is the squadron marking of Jasta 4 (part of von Richthofen's Flying Circus). Fokker triplanes came from the factory with national markings as shown that were of an outdated style.

For more information, check out a Fokker triplane speech I wrote and a Red Baron song I wrote.