I always admired the Red Baron (German World War I flying ace Manfred von Richthofen) for his legendary qualities of courage, loyalty and leadership. I wrote a song about him, but R Band broke up before we ever played it consistently as a group.

This is the insignia for the JG-71 “Richthofen” fighter group of the German Air Force. In World War II, there was an earlier “Richthofen” group (JG-2) that flew Messerschmitt Bf 109's. The insignia for JG-71 added a NATO star in the background of the red R on a white shield. 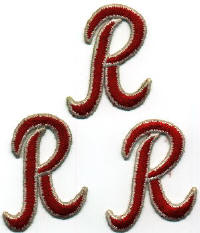 In the Spring of 1994, Elma Pastrick (a senior citizen friend of my mother and me) gave me these red embroidered R's. It was perfect: there were three members in the band I was in. I imagined these R's being attached to sweatshirts or jackets as the symbol for “R” (our) Band. The original form of the logo had a big red R with much smaller letters “B” “A” “N” “D” in black centered underneath it, all on a white shield similar to the center graphic at the bottom of this page.

In the Spring of 1994, I presented the name and logo together to the other members of the band. At that time we were known as “Freddy for the World” based on Fred's stage name. We were in the process of creating songbooks, and Bryan helped me format the logo. Based on the fonts available to us at the time, I approved the use of Times New Roman for the big red “R” and Arial Bold for the smaller black “BAND.” A much smaller “TM” was added underneath the curve of the “D” in “BAND” to give public notice that we intended to use this design as a logo. I also made an ASCII version of the logo.

Bryan, Fred, and I have parted ways at least for now. However, I claim exclusive ownership of the name and the logo. Perhaps someday R Band will reform with new players.